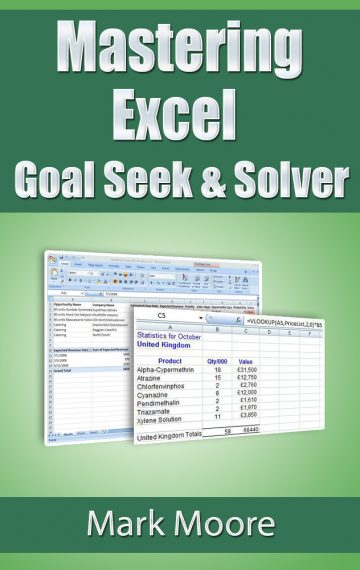 Goal Seek: I need this specific value in this cell. What variable will get me to that number?
That's exactly the question that Goal Seek answers for you in seconds.

Scenario Manager: Learn how to store Best/Mid/Worst case scenarios in one worksheet and switch between them in seconds.

Solver: How can I find the most efficient series of values that give me a certain result?
Solver is a beast of a feature (that most people don't know about).
For example, you need to maximize profits for the quarter but you are constrained. You can only ship 100 units of three types of products. How can you find the right mix of prices and quantities? That's exactly what Solver figures out for you.

As a bonus, I go through the Travelling Salesman problem and how to solve it in Excel.

Travelling Salesman problem:
Given a list of cities and the distances between each pair of cities, what is the shortest possible route that visits each city and returns to the origin city?

If you already have the book and you are looking for the follow along workbooks. Input your information below and I will send it to you in a few minutes. I won't spam you. I send email tips and tricks every few weeks and I let you know when a new lesson is published. That's all.

If you don't see the sign up form below, try disabling any ad blockers. I promise you the form is there.